According to the U.S. Department of Energy (DOE), power plants and other large energy sources account for nearly one-third of U.S. carbon emissions. To combat that, scientific studies projected to contribute tremendously to a greener future are happening right here in Northeastern Wyoming’s “Carbon Valley.”

The Wyoming CarbonSAFE project, led by the University of Wyoming School of Energy Resources (SER), in collaboration with Basin Electric Power Cooperative, is one of 13 original carbon capture, utilization and storage (CCUS) project sites in the U.S.

Carbon capture and sequestration is the process of capturing carbon dioxide (CO2) from emission sources such as coal-fired power plants and storing it safely. For the Wyoming CarbonSAFE project, this means designing and constructing wells that could take emissions from the Dry Fork Station and putting those gases down a 9,800-foot test well for storage. 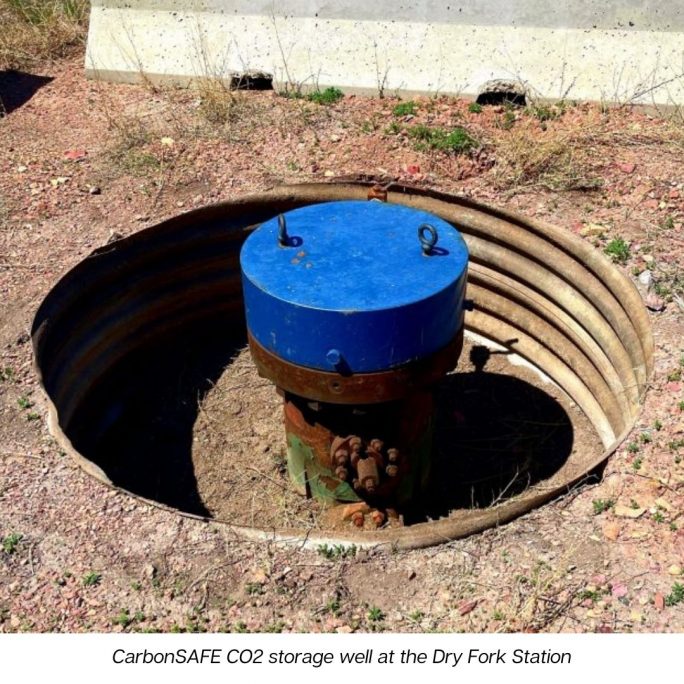 There are currently five phases of the CarbonSAFE process:

Only four of the original 13 projects have advanced on to Phase III, with one of the four being the Wyoming CarbonSAFE program at the Dry Fork Station in Campbell County, Wyoming. One additional project located in New Mexico has recently joined the program.

Phase one focused on the formation of the scientific team, development of a feasibility plan and high-level technical evaluation of the sub-basin and potential CO2 sources. Phase two investigated the storage complex feasibility with the drilling of a test well at the site and a 3D geophysical survey. The well was completed at a total depth of 9,873 feet, and 625 feet of core samples from nine different geological formations were collected for analysis, which has now been concluded. The current project activities of Phase three are focused on finalizing the site characterization, well permitting and carbon dioxide capture assessment.

Recently, spudding of a second deep test well for site characterization began and is nearing completion. Adjacent to the first well that was completed in 2019, the new well allows researchers to gain valuable data and fully characterize the geologic layers of the subsurface site, including the target storage reservoirs and the caprock seals.

“This second well will lead to valuable information to fully characterize the carbon storage site in Wyoming – taking another step toward building a carbon capture, utilization and storage industry in the state,” says SER Executive Director Holly Krutka. “Together, we are demonstrating that Wyoming has safe, secure CO2 storage options.”